If you are a true sports fan then you may be aware of the day once a year where every baseball player is required to wear a jersey with the number 42 on it, this was not done purely out of the baseball organization’s love for the number 42. In fact, it is quite the opposite, back in 1947 the number was quite hated through the years because of the colored player who wore it, but this man was to for sure change their minds. The president of the baseball association at the time knew he could make more money putting on a show for the fans of baseball by bringing in more talent through the eager to play and energetic colored baseball players in the “negro leagues”. Knowing he only had one slot left, had to choose between a variety on talented black players around the country but chose one man in particular to take on the number 42 for his team, and this man was Jackie Roosevelt Robinson.

Chosen not only for his talent but for his resilience and the stand he made that got him kicked out of the army, all because he would not give up his seat to a white soldier of the same rank. As the president of baseball put it “We need a player who has the guts not to fight back under any circumstance but to stand his ground proudly for who he is.” Through the seasons Jackie showed him just that, a player who took the hate coming at him like a curveball and knocked it right out of the park. Sometimes the hate would hit him hard, sometimes it would hit his family, and other times it would hit his team, it was at this point that his own team tried to vote him out of the club. At no point did he let go of his goals, he pushed through every obstacle and it forced the association to like him in the end.

Through all the hardship the legendary baseball player 42 Jackie Robinson faced, he faced it head on by himself and in the end, he broke the barriers of racial segregation in not only baseball but in every other sport, leaving fans demanding for more talented colored players to come join major league sports all around the continent. It was for these reasons there is the Jackie Robinson day in baseball, not only to celebrate the first African American baseball player and all the hardships he faced but to celebrate the now open to diversity baseball organizations and all its players. All this from the efforts of one man, one great leader. 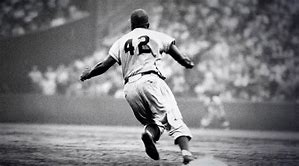